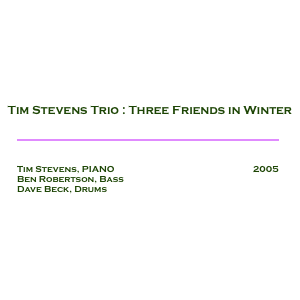 Having established a solid group dynamic through the work towards Nine open questions, the trio’s attention turned to collective improvisation for its second recording, made in July 2005. Three friends in winter takes its title from a tradition in Asian painting that depicts pine, bamboo and plum blossom – the three friends of winter – although of course the implication of the rewording points to the trio’s members themselves. It seemed that having developed a certain musical relationship based on the sometimes complicated tunes of NOQ, it might be worth seeing what happened if the written structures were removed and the music drawn from the air. Only the last selection on the album, its title track, had a written component.

This is probably the band’s least heard album, since the three pieces ‘Pine’, ‘Bamboo’ and ‘Plum’ are lengthy and thus less popular with radio presenters. It is admittedly a rather unusual record too, although particularly with the benefit of hindsight it can be seen to fit within the trio’s body of work as an extending and motivating moment.

‘It seemed unlikely [Stevens’] trio would produce a series of free improvisations, but there they are in the most compelling of their discs. Free improvisation is as often meditative as it is clamorous. There are brief sharp clamours here, but this is essentially an essay in space and tone. It is very compositional, with each instrument working against the others thoughtfully.

‘The music unfolds with engrossing logic, exploiting the drama of the pause and sudden lyrical flow. It allows the players – particularly drummer Dave Beck – to expose new expressive potentials.

‘The opening suite, inspired by the Chinese painting, Three Friends Of Winter, is thoroughly unified and beautiful. For all the decades of practising technique and learning traditional rules, Chinese paintings are often executed with great spontaneity. The Tim Stevens Trio has found a musical equivalent.’

Available on iTunes, or on CD from the following: