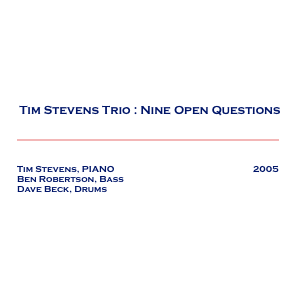 Nine open questions was recorded at ABC Studios Southbank in March, 2004. This first album from the trio made plain its intentions to avoid the standard repertoire and to build a sound based on original compositions and the listening and interplay of the band’s members. Furthermore it established a working method in the studio that relinquished the use of headphones, since these were thought (and are still thought) to corrupt the live sound of the ensemble. Engineer, Mal Stanley, once he had got over this, urged that the released recording kick off with ‘Must be’ – in his words, ‘a killer opening track’. Some of the compositions on the album had been written some years earlier, during the latter days of Browne – Haywood – Stevens, and a couple of others had been produced while I was living in Sydney. The remainder came into being as the band did.

Ted Nettelbeck wrote of the record in Music Forum (Feb-Apr 2005):

‘This is an impressive trio, led by the pianist Tim Stevens…who has contributed all nine compositions, but within a context where Ben Robertson (bass) and Dave Beck (drums) carry equal responsibilities with the pianist for the ensemble. This they all do with high skill and impeccable good taste. Stevens is a disciplined, accomplished pianist with a touch shaped by the impressionistic, introspective tradition introduced to jazz piano by Bill Evans, Robertson has a lovely sound, coupled with a strong melodic sense and accurate intonation and Beck is a sympathetic drummer, with complete control of every aspect of his kit and equally interesting whether using sticks or brushes. It is a pleasure to listen to such a well rehearsed unit wherein each player is so well tuned to the others.’

iTunes is here for your digital convenience, or if you can wait for a CD, then go ahead and order one: